Helium – Dayton ND91-4 + Dayton ND16 — A tiny monitor packing the punch of something much much larger.  Originally debuted at the 2014 Iowa DIY Audio show, this “bose buster” design takes the idea of micro-monitor to a whole new level.

Build and picture credit: Herman T. and the PETT forum

PETT forum thread for the Helium

When I designed the Lithium, the goal was to create something small enough to go almost anywhere, without giving up much in the way of sound quality (even bass). One of the things I have learned from the feedback (particularly non-audio enthusiasts) is that what I or other folks who frequent this forum may consider small isn’t really small in the eyes of the larger population.

The laws of Physics won’t really let you go much smaller than designs like the Lithium or Overnight Sensation and remain nearly full range (for music anyway), so I had to set my expectations accordingly. For the Helium, the goal was to create something the size of a typical computer speaker or HTIB satellite that could either provide a reasonable music experience on a desktop or legitimately reach down to a desirable subwoofer crossover point in a small room home theater application (80 Hz or so).

The Parts Express 0.04 cu. ft. flat pack has external dimensions of 6.5″ x 4.5″ x 5″, which is just about perfect for what I have in mind. While (as my better half would attest), I could easily find enough scrap laying around the garage to put together something like this, the flat pack is a real time and sawdust saver. The port is 3/4″ PVC. There are two straight sections and an elbow (which barely fits in the box). The tuning frequency should be between 65 and 70 Hz. Total length is about 6.5″-7″.

The Dayton ND91-4 is a pretty impressive little driver with 4.6 mm xmax and a claimed 25 mm of peak excursion. According to simulations, this driver will be quite happy in 0.03 to 0.04 cu. ft., reaching an f3 of around 70 Hz in the selected enclosure. It’s not the most economical small driver in the world, but my experience with the ND105 along with the specs gives me confidence that the ND91 can take the beating that trying to reach below 70 Hz as a 3″ driver will dish out.

Once the ND91 is in that box, there isn’t enough room on the baffle for a lot of tweeters. Fortunately, the ND91 should be able to play pretty high in frequency, which should open the door to a small tweeter. The Dayton ND16 has been used to good effect in a number of designs and is very small and under $10, so it is the obvious choice.

The ND91 does pretty well up to 8-10 kHz, while the ND16 can extend down to 3.5 kHz, so there is a fairly broad window to work with. I decided to target something around 5 kHz, so I would have some flexibility with respect to crossover slope. One consideration is that there is not a lot of room in the box for a crossover (the floor of the box is only 4″ x 3.5″ and some of that space will be constrained by the woofer frame.) This means that to some extent, the crossover point and slope needs to be determined by finding a point where the drivers will integrate with a small number of components. After a number of iterations, I settled on a 7 component crossover network that yielded approximately 4th order acoustic slopes with a 5 kHz crossover point.

The final crossover requires a 1 mH inductor, which will definitely be a challenge to fit into this box. Recently a thread on PETT regarding small, inexpensive crossover components included the suggestion of dynavox.com. Sure enough, they have a 1 mH laminate core inductor that is about the size of a sand cast resistor (for $0.84) – so I used it. You can also get the 4 uF capacitor and a terminal cup from Dynavox. You might even get away with their 2.2 uF capacitor for the specified 2 uF. For the 0.2 mH inductor, I used a surplus inductor from some old Klipsch crossovers I bought from Ken McCullough. The closest match I have been able to find is a 23 ga Visaton air core sold by MCM Electronics. The 20 ga Jantzen air core from Parts Express will also work fine. Since there is a 2 ohm resistor in series with that inductor, the small change in DCR of the inductor will have no significant impact. The 2 uF capacitor I used was a surplus mylar from Madisound (still available at $0.35), but the Dayton poly (027-414) will work. 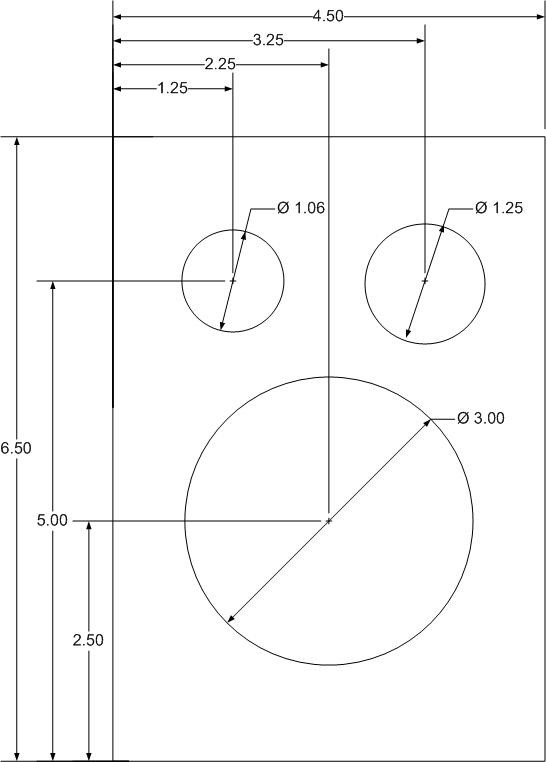 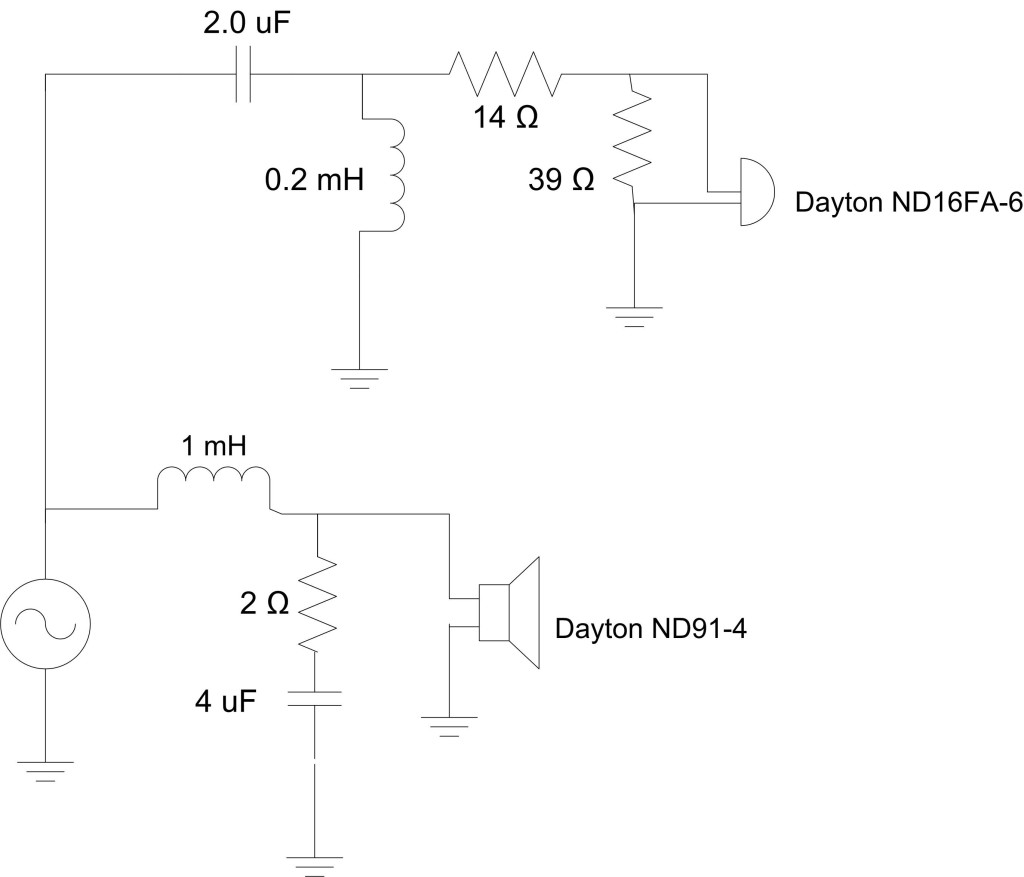 Prototype as shown at 2014 Iowa DIY 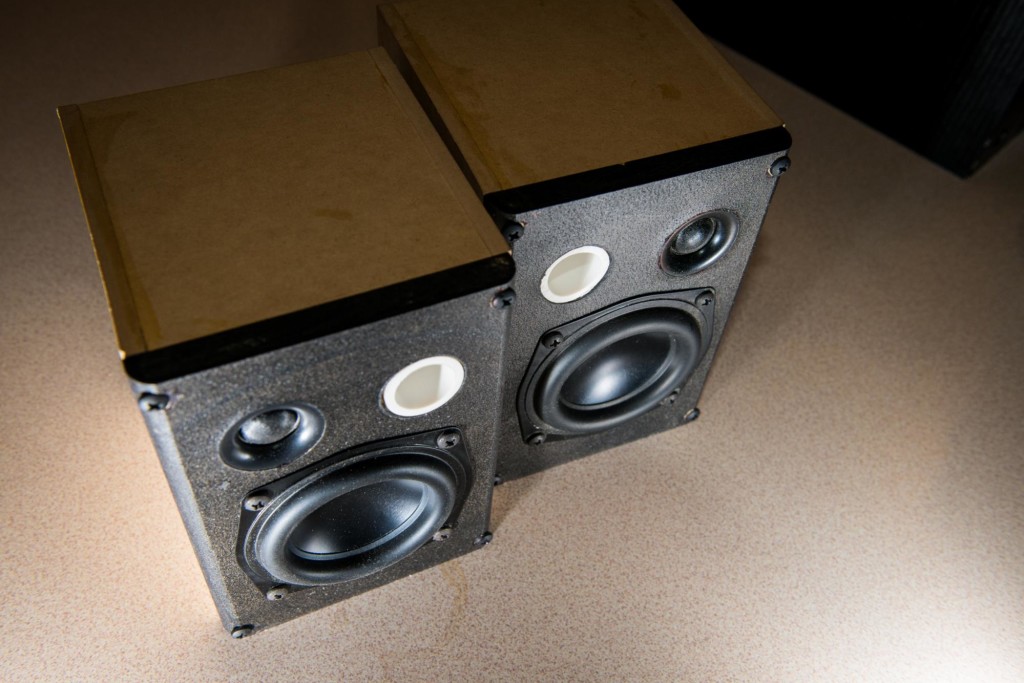 Many thanks to Herman T. and others from the PETT forum for their Helium eye candy!!